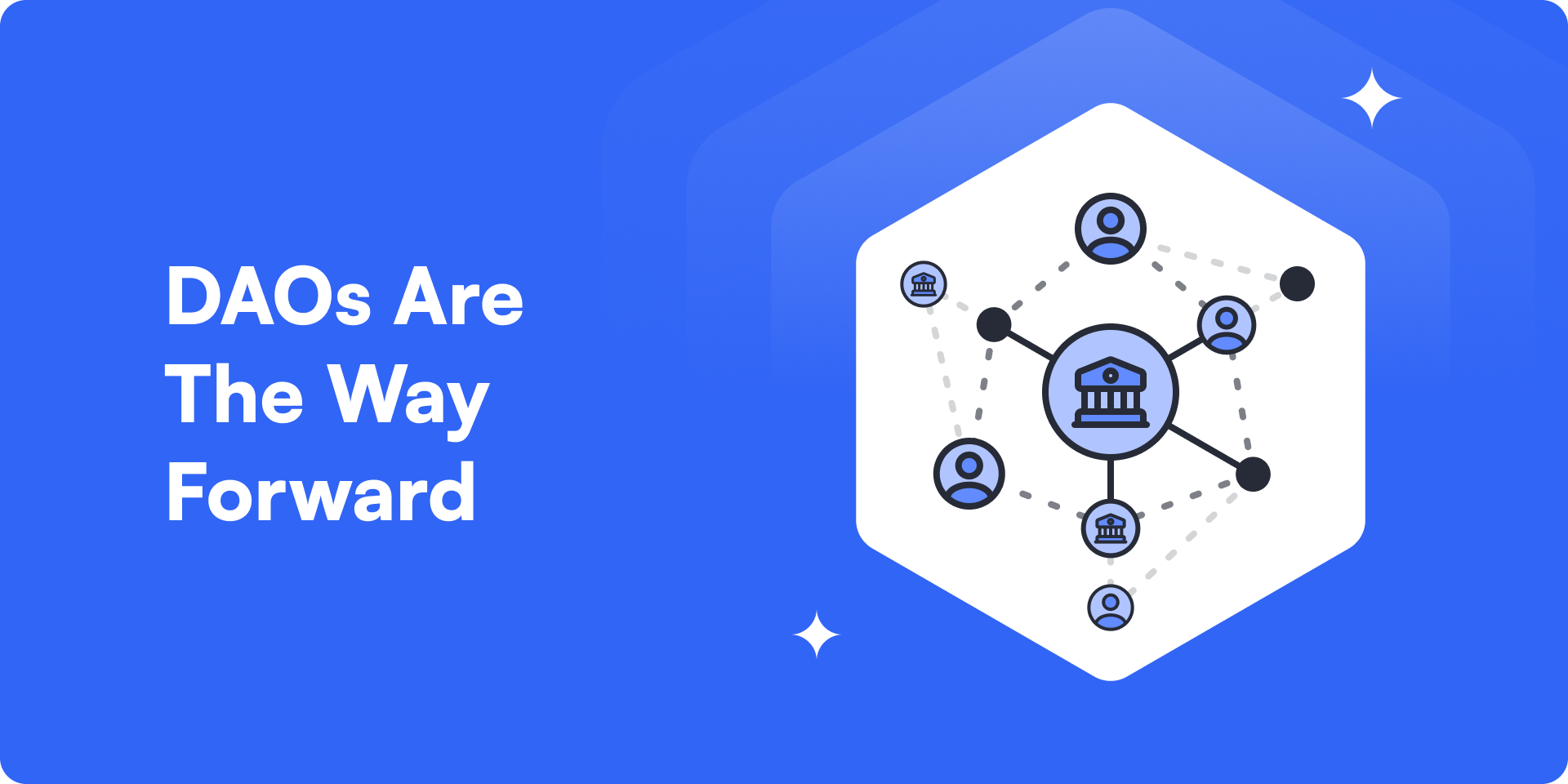 DAOs Are The Way Forward

Here we are again, years after the Mt. Gox incident, when one of the first exchanges in the industry blew up, lost their users’ funds and eroded trust in the ecosystem – and now dealing with a very similar situation all over again.

Alameda Research, 3AC, Celsius, Voyager and now Blockfi have all blown up this year, destroying billions of dollars in collateral damage. But the biggest and most devastating blow up of them all was that of the centralised crypto exchange, FTX.

This one was on a scale that we have not seen before. Billions of dollars were lost and we’re still not clear what exactly happened, with many investigations ongoing. All we know is that a lot of well-intentioned, innocent people lost their savings, investments and hard-earned money because of this event, having stored their funds on the exchange.

Calls for the death of this industry have never been louder. Even those who have been in this industry for multiple bull and bear cycles have expressed their indignation, exasperation and a total state of surprise about how things have panned out.

It feels like we have forgotten the sacred tenets and ethos that got us here in the first place: self-custody, decentralisation, trustless verification.

Let’s take a look at what happened, or at least what we know happened, over the last few weeks.

FTX, one of the biggest exchanges in the industry, recently filed for bankruptcy and the platform’s users weren’t able to withdraw their own funds from the exchange.

It all started with a report from CoinDesk that revealed worrying details about FTX’s balance sheets. It claimed that they had a lot of debt backed by FTT, a token created by FTX. This report was followed by Binance, an entity which held a lot of FTT and also one of the biggest centralised exchanges in our industry, deciding to sell their holdings in the open market.

This led to a massive downward spike in FTT’s price and a subsequent bankrun on FTX’s funds by their users as they wanted to protect themselves from systemic risks that might be caused by the exchange’s poor balance sheet. Turns out that the risk that they should’ve been worried about was something else.

FTX had allegedly lent $10bn of users’ funds to Alameda Research, whose relationship with FTX has been quite questionable, as they were both co-founded by Sam Bankman-Fried (aka SBF) and it wasn’t clear what the relationship between the two entities were.

Alameda Research is a trading/investment firm. They allegedly used the funds they received for leveraged speculation in the open market. Alameda suffered severe losses during the downturn in market trends over the last few months. And it is alleged that FTX customers’ funds were a part of these losses.

This led to millions of users who trusted FTX to be responsible with their funds essentially losing their money. This was a capital destruction event at a scale that has rarely occurred in any financial market around the world. The incident has put a massive dent in our industry’s reputation among outsiders.

We have taken some liberty in simplifying the accounting aspects of what happened, as the details are not clear yet. Now that we have some context around this event, we want to focus on two characteristics of the way FTX was run and structures that led to this disaster: opaque and centralised.

Most of FTX’s operations and finances were opaque. And the entity had one person making a lot of crucial decisions. These claims are given credibility by the fact that even internal employees seemed to be completely unaware of the egregious activities what was going on inside the company.

How do we move forward from here and what do we recommend to prevent these sorts of disasters from happening in the future?

We believe that if organisations like FTX are run more like DAOs, preventing such events from happening in the future will be much easier.

Why do we think so?

In a DAO, the general practice is to make sure that the organisation’s financials, governance and operations are transparent and accountable to their contributors, the community and the users of their products.

In addition to transparency, governance is distributed among community members. Hence, everyone in the organisation will be able to know what’s going on and can have a say in how it’s run.

It is because of this transparency and distribution of power that DAOs can be resilient to such disasters like the recent FTX meltdown.

With the way DAOs are set up, it is very difficult for one person to single-handedly cause such destruction, as has happened with FTX where the heads of the organisation took some decisions that employees and users had no say in, but were ultimately responsible for the organisation’s downfall.

The failure of financial entities in the crypto industry is often because of a lack of transparency and centralised points of failure. Balance sheet blowups and bankruptcies are issues that could be prevented if exchanges performed their operations on-chain, allowing anyone in the world to identify and flag potential issues.

DeFi exists to prevent these setback events with its ecosystem of products like automated market makers, on-chain lending, derivative vaults, etc. – and what’s more, a majority of these products are built by DAOs.

The source code of these DeFi projects is mostly public and auditable and are built on open, decentralised platforms like Ethereum. Compared to their centralised counterparts, they are more transparent and actively work to remove single points of failure.

We are well aware of the bottlenecks and challenges that we face to make these solutions easily accessible to users. Smart contract hacks and UI/UX issues are the two most commonly stated roadblocks.

To that end, we take the utmost care and consideration when it comes to the contracts that we use at Parcel. We dedicate a lot of time during our internal sync calls to conduct discussions about making sure our product is easy and intuitive to use.

Keeping these challenges and the aforementioned values in mind, let’s dust ourselves off of the mistakes we’ve made and build towards a better future for our industry.

DAOs are a big part of that future. They represent a monumental shift in how humans can coordinate and get work done, while keeping each other accountable. And also remain accountable to those whose problems they’re solving. We do not take this movement lightly. It is very important that we make this work, no matter what. We need it, and deserve it. And so does the world.

Defining The Contributor Economy: A New Paradigm of Work

How The Contributor Economy Can Dominate The Future Of Work