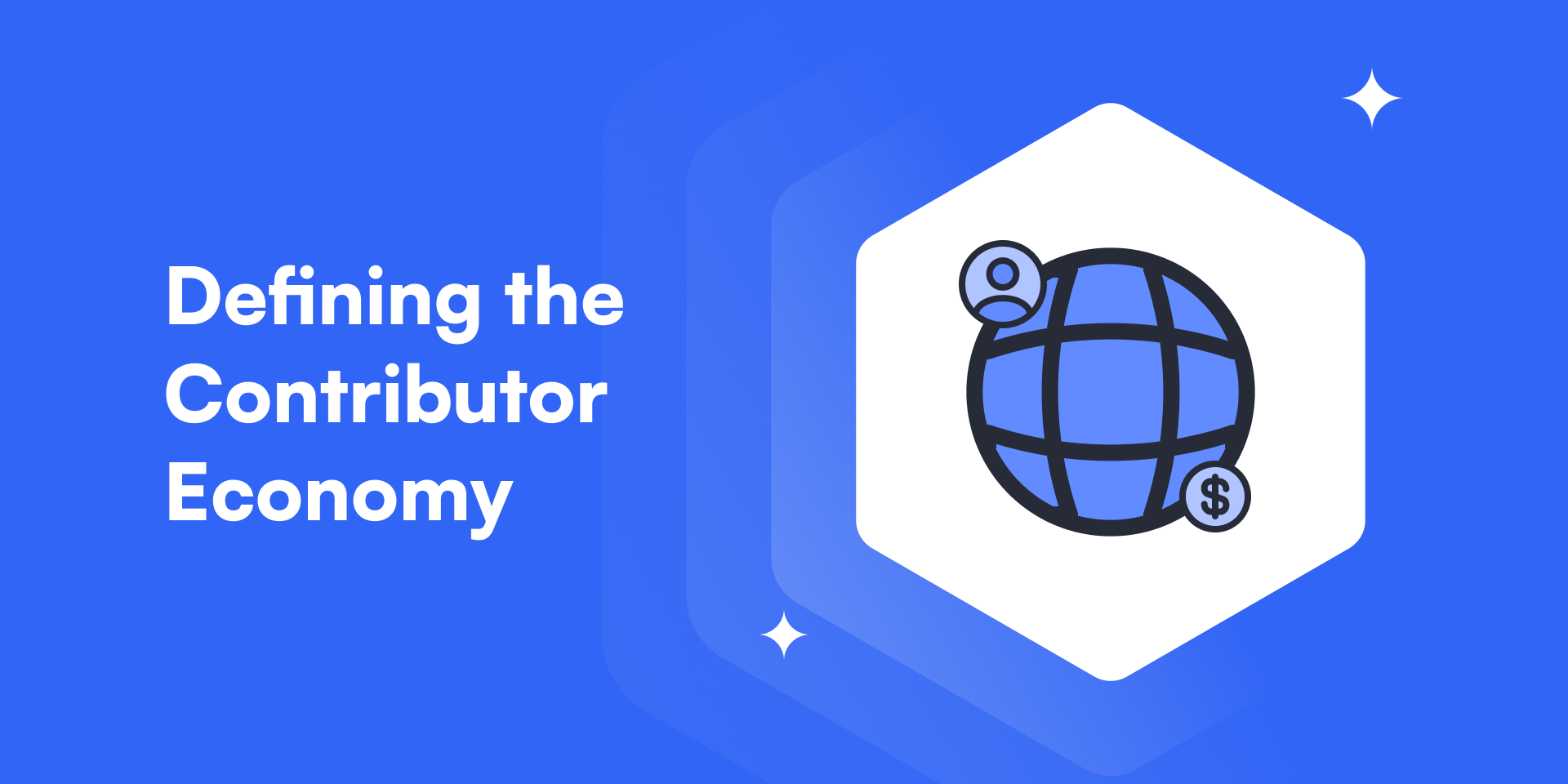 Defining The Contributor Economy: A New Paradigm of Work

The first decade in the world of cryptocurrencies was dominated by rampant speculation and euphoria that resulted from it. This revolutionary technology that enables truly open, borderless, censorship-resistant transfer of value between people on the internet has been mired with criticisms. People have often declared that this industry will be in a bubble that inflates and deflates perpetually in proportion to the number of market participants present in the space.

There is a clear contradiction between insiders and outsiders in the perception of the potential of this technology.

The start of the new decade witnessed a supercharged growth of applications in crypto that took speculation to a whole new level. We’re talking about “DeFi Summer”, the rise of art and collectible NFTs and the speculative market around them, yield farming, airdrops, and video games with smart contracts integrated in them.

All of this resulted in new narratives being formed around what crypto can enable as a technology. One of those narratives was the rise of the ownership economy.

The ownership economy is said to comprise the products and services that transform users into owners. We also witnessed the rise of the now widely popular term ‘web3’ to describe it.

While the market was focused on the narrative of users being owners, another frontier of innovation emerged in the ecosystem. This phenomenon pushes the boundaries of what we think crypto can do beyond just giving the users ownership of a platform. We call it the contributor economy.

The contributor economy is a path towards a world of equitable opportunities driven by active contributions and real economic activity over passive ownership and euphoric speculation.

“Ownership is passive,
Contributions are active.”

A new form of organisational governance is being iteratively experimented on in the form of Decentralised Autonomous Organisations (DAOs).

DAOs enable novel ways in which groups of people can come together, set shared goals, and collaborate with each other to achieve them using well-aligned incentives.

With the rise of DAOs, we’ve witnessed the emergence of something fundamentally different from what web3 is commonly defined to be representative of.

What Is The Contributor Economy?

The contributor economy predominantly exists on smart contract platforms, like Ethereum, and the economic interactions mostly occur between the multisigs of DAO treasuries and the pseudonymous wallets of contributors.

According to analytics from DeepDAO, The total value locked in DAO treasuries is estimated to be around $10 billion at the time of writing.

There are about 18 DAOs with over $100 million in their treasuries. The number of people with memberships in DAOs (governance token holders) surged past a million and keeps on growing.

Based on publicly available data, a combined total of over $500 million worth of contributor payrolls have been deployed by DAOs using payroll management tools at the time of writing. This is real economic activity happening on-chain outside of just price speculation, yield farming, and airdrops.

It can’t be denied that there is a burgeoning ecosystem of experimentation and innovation in human coordination without a central entity directing it.

Advantages of Participating in the Contributor Economy

DAOs are fundamental to the contributor economy. They have certain characteristics that traditional organisations don’t have.

Product and governance discussions are held in DAOs’ Discourse forums and Discord servers. Decision-making and governance are performed out in the open with tools like Snapshot and Tally. Governance votes, economic transactions and discussions are made public when they get recorded on the smart contract platform’s ledger and state.

Essentially, most DAO governance processes are transparent for the entire world to see.

A member owning a part of an organisation entails that they’re able to participate in its governance and decision-making processes. If it’s a for-profit organisation, it also entails that members might have access to future revenues.

In DAOs, each and every contributor and member is given the ability to claim ownership. This is because contributors are rewarded with easily transferable governance or equity tokens and members have the ability to purchase them on an open and borderless market.

These tokens are commonly a requirement if a member wants to participate in governance or get access to future revenues. This is in contrast to how things usually work in traditional organisations where there are numerous regulatory bottlenecks for transfer of ownership and equity. Collective ownership is much easier in DAOs created with smart contracts than in traditional organisations created with trust.

DAOs can be structured more equitably and democratically. Every member can now easily participate in governance. The amount of decision-making power that contributors command in a DAO grows with the quality and quantity of their contributions.

DAOs, as a result, are very democratic in how they execute governance. Democracy, in essence, is an organisational structure that decentralises power. And if structured in the right way, DAOs do exactly that by distributing power and making sure it doesn’t get concentrated.

Being able to participate in this way in an organisation instills a sense of purpose and belonging in contributors as they’re spending their valuable time working on something they truly believe in with a community that they love.

This is good for organisations that aim to retain and attract talented individuals to contribute towards achieving their goals.

Hammad from IndexCoop articulates the benefits of DAOs really well,

“DAO’s allow for all members to have a voice and opinion, allowing them to participate in decision making or electing the right leaders for their DAO, compared to a traditional organisation which will be run by a board of directors which the employee had no say in electing.

Additionally, DAOs can facilitate and automate the transparent distribution of funds and financial rewards. Instead of a small handful of powerful people deciding how money is spent and how employees are reimbursed for their time, DAOs create an open and mutually beneficial system whereby each member knows the reasons for each decision that affects them.”

DAOs can also alter the way that an individual perceives his or her work because of the nature incentives that get put into place by DAOs. On this subject, Icedcool from Bankless DAO says,

“The big advantage that I think DAOs have and what makes them attractive, is that you get to have ownership over your work, and a stake in the success of the organisation, that is represented in the form of tokens (depends on the DAO).

When a contributor works and they make a difference, that difference can and should show up in the valuation of their compensation. Using tools like Coordinape, you could even say that you start to get a continually updated valuation on your contribution vs. a static salary.”

The contributor economy is a phenomenon that changes the nature of work from being rigid to fluid and flexible.

This is attractive to people who have a tendency to work on multiple projects at once. Since becoming a contributor to a DAO usually is not gated or invite-only, contributors have more freedom to choose the organisation which best aligns with their goals and values.

Oftentimes, they choose to simultaneously work at multiple organisations, which is often unacceptable or frowned upon in the traditional workplace.

Kempsterrr from DeveloperDAO agrees with this sentiment,

“A big reason for me to work in DAOs is about the freedom one gets in choosing what he or she works on and help shape the direction of the organisation.

You can choose the project or workstream that makes the most sense for you, and also there are many DAOs to choose from and it’s very likely there is a group of very like-minded folks working on exactly what gets you excited in a particular DAO. You’ve just got to find it.”

Most of these DAOs exist on the Ethereum network right now because that’s where a lot of experimentation in governance and organisational structure is happening at the moment. However, the network has been criticised by some for not being scalable enough to support the future a lot of us envision for DAOs and the contributor economy.

Although, with the advent of scalability solutions like rollups and sharding, and the constant innovation that has been happening in the DAO tooling space, this dream seems very realistic to us.

We believe this new paradigm of governance has the potential to alter the future of how people work for an organisation and how they view work in general. The future of human organisation is decentralised, open and transparent. And we’re glad to be building tools that contribute to making that happen at Parcel.

It is this strong belief in the DAOification of communities, organisations and enterprises and the positive impact it can have on the world that keeps us going.

DAOs Are The Way Forward

How The Contributor Economy Can Dominate The Future Of Work